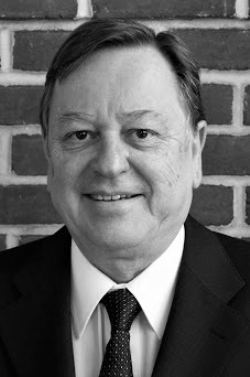 Evin’s private sector experience includes corporate management at Philip Morris International; he represented Philip Morris Companies in Ankara and was responsible for the legal and administrative aspects of direct foreign investment in a major consumer product sector during its transition from state monopoly to international competition.

As director of education of the Aga Khan Trust for Culture, a Geneva-based international development foundation, he coordinated the Aga Khan Program for Islamic Architecture at Harvard University and the Massachusetts Institute of Technology, and in cooperation with that US-based resource center assisted in the development of architectural education in Asia and Africa. He has also served as a consultant to the Aga Khan Award for Architecture as well as an editor of the Award publication.

Evin initiated, with the European Commission’s support, a policy dialogue on the future European architecture, EU’s eastward expansion, its Mediterranean policy, and the customs union agreement with Turkey. He has established, with the European University Institute (EUI), Schuman Center for Advanced Studies, EU- Turkish Observatory, and several joint programs of professional training and policy research with academic institutions and non-governmental organizations, such as ELIAMEP, USIP, The Kokkalis Program at the Kennedy School of Government, Harvard University.

Evin is also the founding member of the Turkish Economy and Social Studies Foundation and the Middle East Studies Association of North America. He has authored or edited over 10 volumes on politics, culture, and development. His research interests include theories of the State and elites; Turkish political development; and democracy and civil society. He currently works on current foreign policy issues related to the European enlargement, its significance for Turkey and the region as well as its effect on Transatlantic relations. 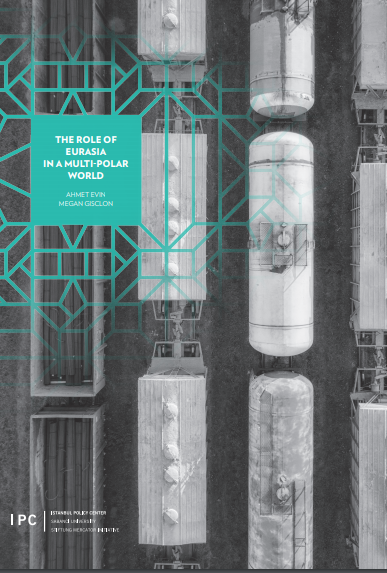 The Role of Eurasia in a Multi-Polar World

Senior Scholar Ahmet Evin and Managing Editor and Researcher Megan Gisclon’s report The Role of Eurasia in a Multi-Polar World was published in March 2019. 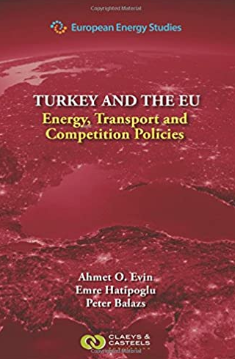 Turkey and the EU: Energy, Transport and Competition Policies 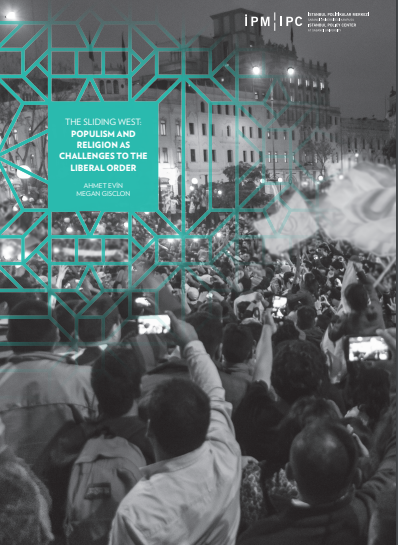 The Sliding West: Populism and Religion as Challenges to the Liberal Order

Senior Scholar Ahmet Evin and Managing Editor Megan Gisclon‘s report The Sliding West: Populism and Religion as Challenges to the Liberal Order was published in July 2016. 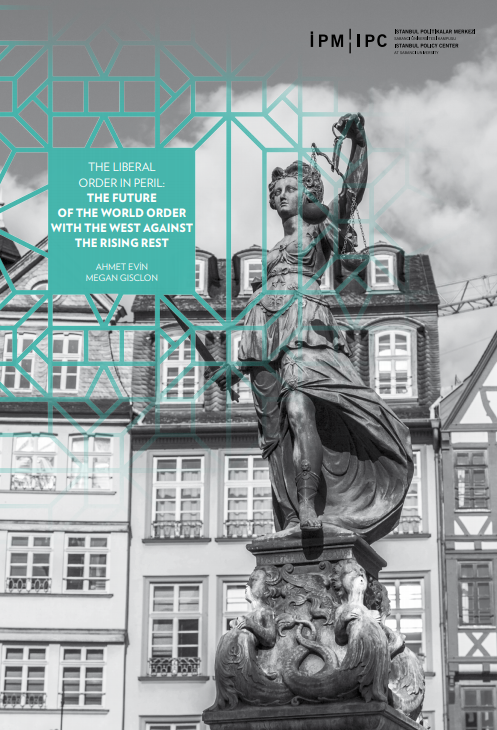 The Liberal Order in Peril: The Future of the World Order with the West against the Rising Rest

Senior Scholar Ahmet Evin and Managing Editor Megan Gisclon’s report The Liberal Order in Peril: The Future of the World Order with the West against the Rising Rest was published in March 2015. 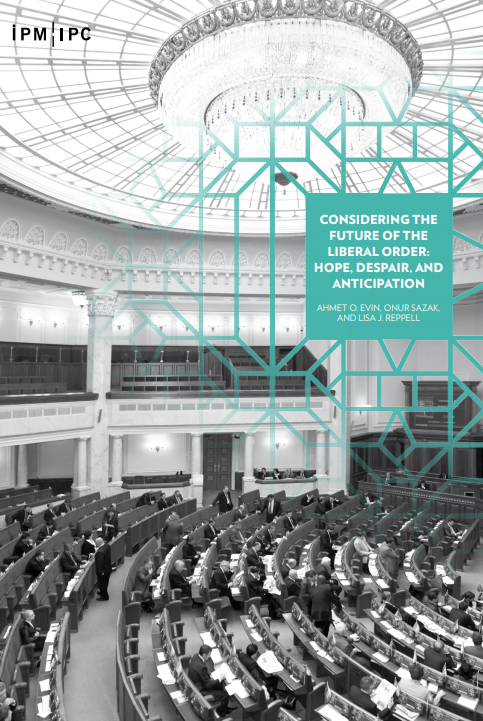 Considering the Future of the Liberal Order: Hope, Despair and Anticipation 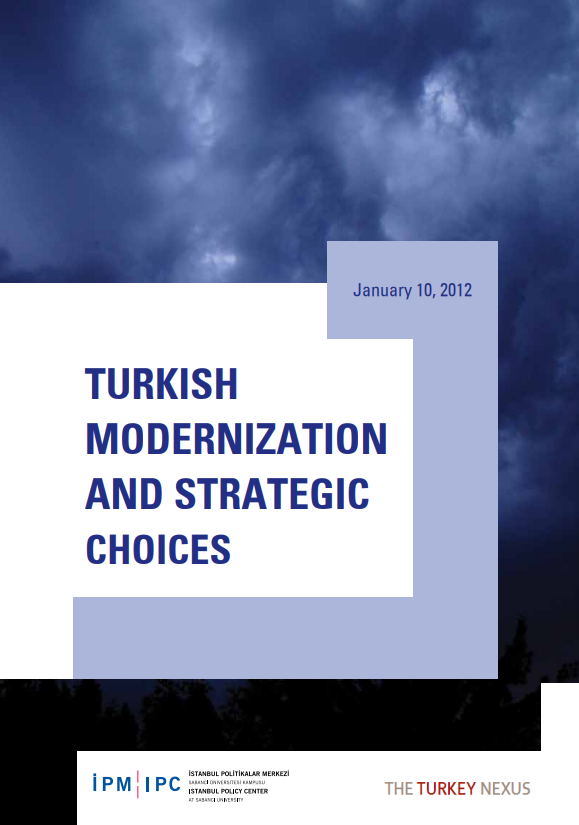 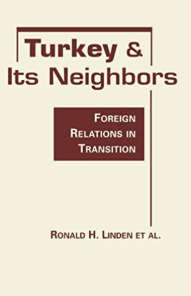 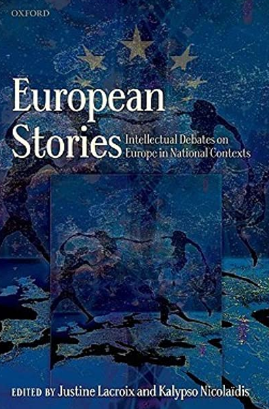 Convergence and Resistance: the European Dilemma of Turkish Intellectuals 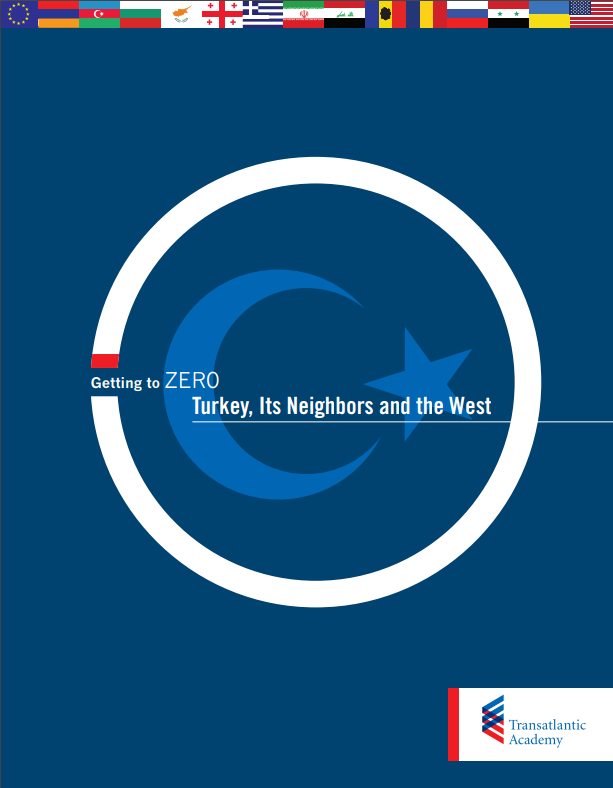 Getting to Zero: Turkey, Its Neighbors and the West 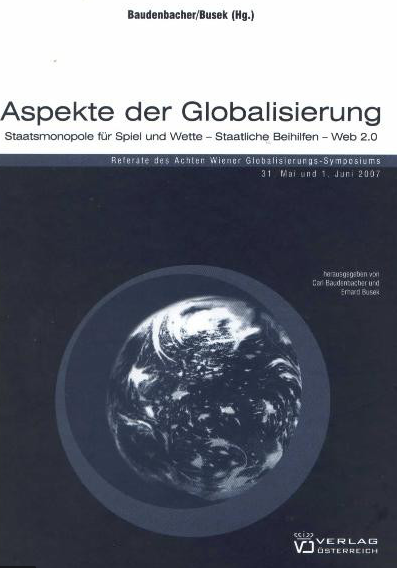 Turkey and the European Union: Paradigms and Paradoxes 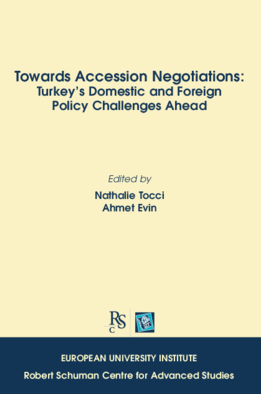 Towards Accession Negotiations: Turkey's Domestic and Foreign Policy Challenges Ahead 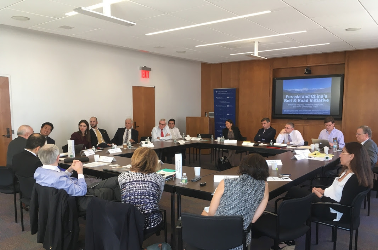 The Role of Eurasia in a Multi-Polar World

In partnership with the German Council on Foreign Relations (DGAP), IPC organized the one-day conference “The Role of Eurasia in a Multi-Polar World.” The conference, which was spearheaded by Senior Scholar Ahmet Evin, took place at DGAP’s office in Berlin on December 6, 2017. 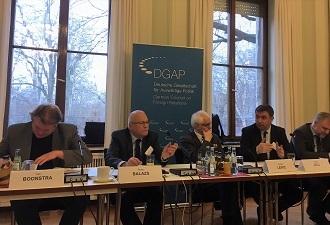 The Future of the Liberal Order

IPC-Sabancı University-Stiftung Mercator Initiative and Transatlantic Academy co-organized a full-day event titled "IPC Observatory: The Future of the Liberal Order" on May 23, 2013 at the Seed, Istanbul. 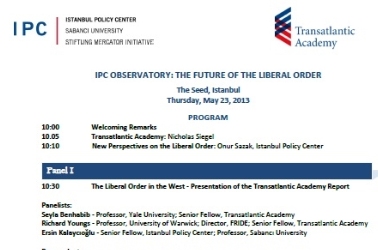 Istanbul Policy Center Senior Scholar Bahri Yılmaz organized The German-Turkish Round Table (GTRT), funded by Robert Bosch Foundation and the German Institute for International and SecurityAffairs (SWP) on November 22-23, 2012 in Istanbul. 45 experts from Turkey and Germany were brought together to discuss “China’s Growing Clout in International Relations; Turkish and German Perceptions.” Participants discussed economic relations of Germany and Turkey with China, China as a major topic in Turkey’s and Germany’s Foreign Policy, and China’s policy in the Middle East and North Africa throughout the conference. The GTRT is an initiative that seeks to build bridges and promote dialogue between Germany and Turkey in areas of mutual international political and economic concerns.

Senior Scholar Korel Göymen organized “Environmental Governance International Conference” in Istanbul on November 16-17, 2012. The discussions ranged from environmental governance at national and local levels to the role of regional and international organizations, as well as the involvement of NGOs in environmental governance. There were multiple panel discussions, enriched by keynote remarks from prominent members of Turkish and European civil society, government representatives, public officials, academics. 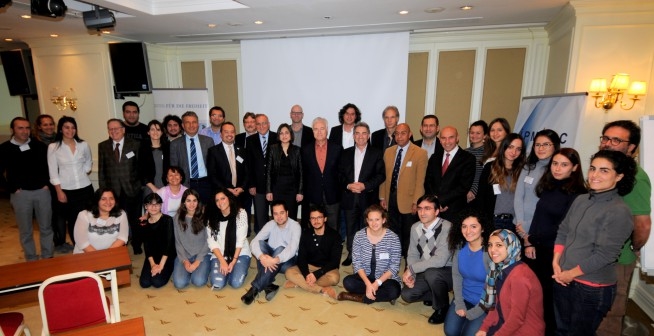 IPC hosted Young Leaders Conference on May 13, 2012 at its Karaköy Headquarters, organized by the American Council on Germany, along with the Atlantik Bruecke and the US Council on Italy. This year the conference on “Mediterranean Bridges” took place in Istanbul May 12 – 13. Young Leaders from Germany, Italy, Turkey, the United States and North Africa were the participants of the two-day conference. They attended fruitful discussions on “Roots of Crisis: Political and Economic Effects of Turmoil in the Middle East,” “The Energy Equation: The Global Impact of Oil and Gas Flows, the Iran Sanctions and Pipeline Issues,” “The Influence of New Media and Digital Technologies,” and “Looking into the Future: Demography, Democracy and Prosperity.” 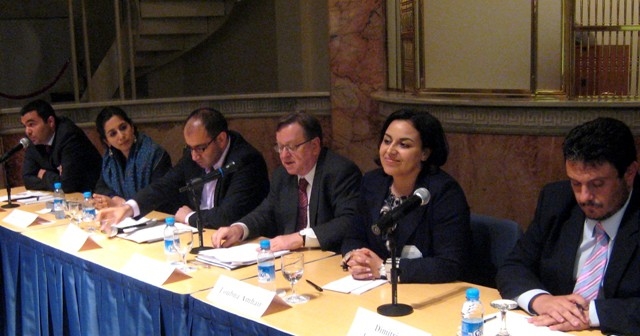 The Turkey Nexus on Turkish Modernization and Strategic Choices

In collaboration with Nexus Forum, Istanbul Policy Center Senior Scholar Ahmet Evin organized the workshop on January 10, 2015 in Istanbul. It was the first of a cycle of open discussions among corporate executives and policy makers on Turkey’s economic policy and developments in energy and infrastructure. It highlighted some key issues to be overcome in order to step up the country’s modernization and facilitate foreign investments, chief among which productivity and the regulatory environment. The three main topics of discussion were Turkey’s future energy balance, the need for consolidating institutions across the board, and how to manage the predicted economic slowdown.

A joint initiative by IPC and Stiftung Mercator, the “Experts Meeting on Contemporary Turkish Studies” was held in Essen on December 8-9, 2011. The purpose of the meeting was to come up with proposals about fostering contemporary Turkish studies in Germany.

Senior Scholar Korel Göymen organized “The International Conference on the Role of Think Tanks in Policy Formation” in Istanbul on November 18-19, 2011. Director Fuat Keyman was a panelist on the landscape of think tanks in Turkey, while Senior Scholars Ersin Kalaycıoğlu and Ahmet Evin each facilitated a session throughout the event. The discussions ranged from good governance in Turkey to think tanks as the agents of change in complex societies. There were multiple panel discussions as well as lectures by prominent members of Turkish and European civil society.

Faraway, So Close? Reaching Beyond the Pro/Contra Controversy on Turkey's EU Accession

The workshop titled “Faraway, So Close? Reaching beyond the Pro/Contra Controversy on Turkey’s EU Accession” was held at IPC in June 2-4, 2011. The two-day workshop co-organized by IPC and Freie Universitat, Berlin, started with an opening reception where Thomas Risse presented his new book: A Community of Europeans: Transnational Identities and the Public Sphere. Among the topics discussed were historical institutionalist and comparative approaches to Europeanization, norm diffusion or normativity and migration as well as the impact of the EU norms on migrant flows.

Europe Beyond the EU: The Geo-Economy of the Wider Continent

A joint initiative by IPC and the Aspen Institute, “Europe Beyond the EU: The Geo-Economy of the Wider Continent” was organized on March 4-5, 2011. The purpose of this conference was to shed light on Europe’s new economic governance framework and to provide a common Turkish-Italian approach. The conference underlined that redefining Europe’s borders, starting with Turkey, is a process increasingly influenced by economic relations as well as political developments. The important issues discussed delved into Europe’s liquid borders with special emphasis on northern Africa and the Middle East. Attending the meeting were Nihat Berker, President of Sabancı University; Fuat Keyman, Director of IPC and Ahmet Evin, IPC Senior Scholar.