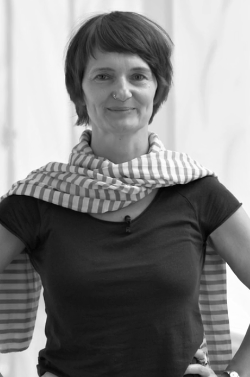 Martina Priessner is a documentary filmmaker and author based in Berlin. She obtained her degree in Social Sciences at the Humboldt University of Berlin. For the past several years, her interests have focused on German-Turkish migration.

Priessner completed her first full-length documentary in 2010 titled, “Wir sitzen im Süden” (Based Down South), which was nominated for the Grimme Award. In 2013, she made the found footage film “Everyday I’m Çapuling” about the summer 2013 Gezi protests in Istanbul. Between 2008 and 2010, she has worked as the dramatic adviser and curator at the Ballhaus Naunynstrasse, a post-migrant theater in Berlin. During that time, she completed “Kahvehane – Turkish Delight, German Fright? Anatolian coffee houses in Kreuzberg and Neukölln.” She has been the recipient of scholarships from Nipkow, Defa, and Kulturakademie Tarabya.

During her Mercator-IPC fellowship, Priessner realized the documentary “650 Words,” which deals with migration and language. Currently, she is working on a documentary about Assyrians in Tur Abdin, Turkey.

A film by Martina Priessner

The film 650 Words tells the story of eight people from different regions in Turkey—all of whom want nothing more than to be reunited with their loved ones in Germany.

In the film, those interviewed, Ayşe, Ibrahim, Nur, Soner, Hayriye, Halil, Zelal, and Naime, reflect on the language course as a journey they embark upon to join their husbands and wives in Germany.

This documentary was realized through the Mercator-IPC Fellowship Program.