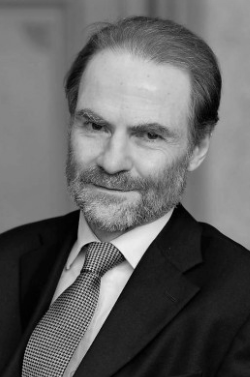 Timothy Garton Ash is Member of the International Advisory Council of Istanbul Policy Center and Professor of European Studies in the University of Oxford and an internationally acclaimed public intellectual. In 2006, he was awarded the George Orwell Prize for political writing. Ash was featured in a list of 100 top global public intellectuals chosen by the journals Prospect and Foreign Policy, and in Time magazine’s list of the world’s 100 most influential people in 2005. A frequent lecturer, he is Fellow of the Royal Society of Literature, the Royal Historical Society and the Royal Society of Arts and a Corresponding Fellow of the Berlin-Brandenburg Academy of Sciences. Honors he has received for his writing include the David Watt Memorial Prize, Commentator of the Year in the ‘What the Papers Say’ annual awards for 1989, the Premio Napoli, the Imre Nagy Memorial Plaque, the Hoffmann von Fallersleben Prize for political writing, the Order of Merit from Germany, Poland and the Czech Republic, and the British CMG. Since 1990, he has been a Fellow of St Antony’s College, Oxford, where he directed the European Studies Centre from 2001 to 2006 and is now Isaiah Berlin Professorial Fellow. He became a Senior Fellow of the Hoover Institution, Stanford University, in 2000. In 1986-87 Professor Garton Ash was a Fellow at the Woodrow Wilson International Center for Scholars in Washington, DC.

Timothy Garton Ash is the author of nine books of political writing or ‘history of the present’ which have charted the transformation of Europe over the last thirty years. Among his books are ‘Und willst Du nicht mein Bruder sein …’ Die DDR heute (1981), We the People: The Revolution of ’89 witnessed in Warsaw, Budapest, Berlin and Prague (1990), In Europe’s Name: Germany and the Divided Continent (1993), The File: A Personal History (1997) and, most recently; Facts are Subversive: Political Writing from a Decade without a Name (2010). His journalistic pieces and essays have been published in well-respected newspapers and journals such as The New York Review of Books, The Independent, The Times and The Spectator. He also writes a weekly column in The Guardian.

Garton Ash, who holds a BA and MA in Modern History from the University of Oxford, studied at the graduate level at St. Antony’s College, Oxford, at the Free University in West Berlin, and at Humboldt University in East Berlin.

Free Speech in Turkey and the World with Timothy Garton Ash

IPC hosted a rare event that provided a closer look into the “Free Speech in Turkey and the World.” The renowned academic and public intellectual Timothy Garton Ash, who is also a professor at the University of Oxford and a regular contributor to the Guardian and the New York Review of Books, delivered the keynote speech. Ash elaborated on the impediments to the freedom of speech in Turkey and around the globe, and he shared his insight on removing those obstacles. IPC Senior Scholar Ayşe Kadıoğlu, who put together this timely event, chaired the expert panel, which featured Hasan Cemal (Milliyet), Yasemin İnceoğlu (Galatasaray University), and Halil Berktay (Sabancı University), and Kerem Öktem (Oxford University). The panel focused not only on the actual limits to free speech in Turkey, but also included a theoretical debate on the possible limits to free speech. The “Turkey Free Speech Debate” also introduced a new Oxford-based website on this issue. The website can be accessed at freespeechdebate.com.